⓵. The Wilderness is divided into several separation battlefields with different bosses

⓶. Each battlefield will reset on 12:40 and 21:30 everyday and kill the boss to win massive rewards

⓷. Players who attended in boss fights and dealt more than 2% damage will receive rewards afterwards

⓸. During the boss fight, players have a change to get random rewards. A boss can be challenged by 5 players at the same time

⓹. Players can also conduct daily challenge against minions and elites, players with the last hit will receive massive rewards

⓻. During the challenge, players can change the battle mode at anytime. There are Guild and Peace modes. Under Guild mode, players can deal damage to players of other guilds

⓼. Players will not restore HP except respawn in Wilderness

✼ The Wilderness is looks like the Boss Instance, which included Ghostly Field, Serpent Field, and Fiery Field (coming soon). 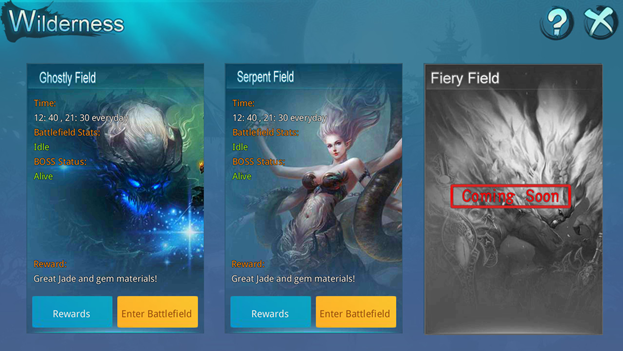 ✼ Massive rewards with the challenge of Boss, which provided one more gameplay method for all the players.

✼ Furthermore, the most special point for Wildness is PvP, wildness PK, and PK players from other guild during PK with Boss. Even there are only maximum 20 players for one guild PK, the hatred between the guild can actually escalating.

[Information above is subject to in-game as standard]

Next：ღ Chapter of BP: Increase BP with full of flowers