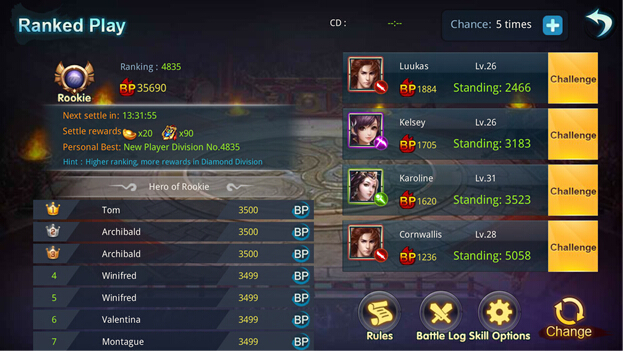 ✪ Rank Match is the earliest gameplay for one out of three systems in Arena. There are 6 divisions, which included Rookie, Bronze, Silver, Gold, Platinum, and Diamond. Player will start the challenge from the lowest division.

✪ Player will be able to attend rank-up match when reaches the front row in Rookie Division and allow to join the next division if meet the requirements. In other words, if the player does not have high enough BP will never meet the real expert player. Of course, for those players who still at lower division will receive reward based on the performance too at 20:30 each day. There will always reward those in Rank Match no matter win or lose. One more thing is, the ranking will not change if lose in match, so don't worry~

✪ Lastly, what is the reward that we received to use for? So, as we know, each player will get Arena Token as reward. It is used to improve Arena Medal and you can find it at Character interface. The Arena Medal will increase one’s BP, which means that, once your ranking increase, your BP will increase too. Besides, the Ranked Play also a good chance for you to challenge yourself and your friends!