The main thing in Guild is about the honor of team work. The only way to be outstanding in this immortal world is manage the guild together and let the guild growth together with all the guild members. 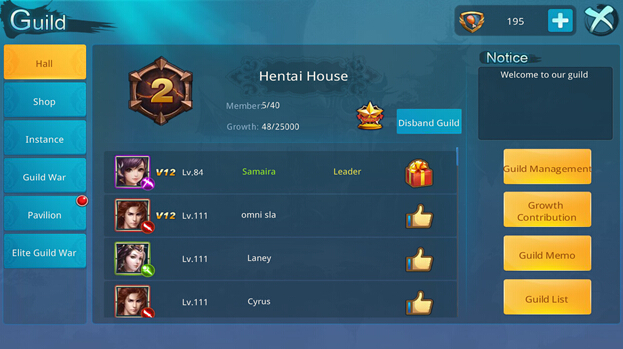 ✑ From the Guild interface, which is not complicate and it is clear to see the members in list and also the guild contribution. The easiest way to contribute is through the instance. The vitality cost in instance will change to become the guild contribution points, and these points can be used in Guild Shop to exchange item which only can get from guild. Of course, for VIP player who does not have enough vitality, can contribute through donate coin or ingot. ✑ When talk about Guild Instance, always remind people the battle with boss. Through clear the instance, not only increase the guild popularity, but also one of the chances to battle with friends. For each stage, there are a strong boss waiting there. Besides, there are also various scenes and also different difficulties for each stage, which are suitable for the player who likes high difficulty and challenge. Player can receive rich prizes which are very hard to get.

✑ Guild War is available once a week and those who fulfill the requirements are able to join. Since player is unable recover HP during the Guild War, thus, here to suggest that, increase the BP, also enhance, upgrade, and star-up all the gears, to make sure you are facing the challenge in a very good condition. After challenge, there will be a collective ranking for guild and personal ranking for each player. So, are you really for all this~? 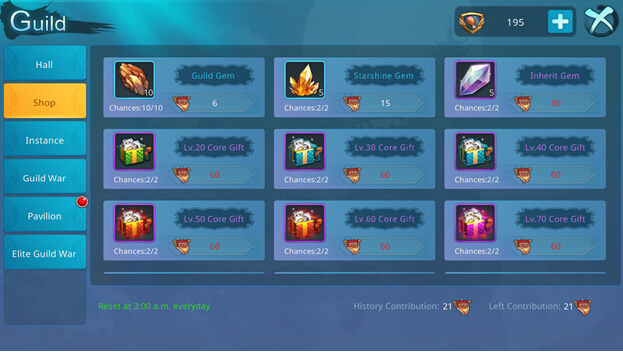 ✑ Before the end of this, the most important thing is, the contribution points can be used to exchange item from Guild Shop. Player can boost up the contribution points without limit through Guild Instance then exchange all the material needed. This is because some items and Aircraft Gem are hard to collect, so this is a good and easy way to get them all.

✑ Lastly, the special of the Guild Instance is, it is effective in gather the team to work together compare with other mobile online game.

[Information above is subject to in-game as standard]